As we crawled our way up the motorway through the classic Friday afternoon duet of traffic and roadworks, stuffing our faces with alternate handfuls of chipsticks, mint imperials and grapes (quite possibly the trifecta of car snacks), I felt the tell-tale bubbling of nervous excitement. We were headed north towards the bright lights of Manchester to join hundreds of other LGBT choristers at the Hand in Hand Festival 2017, and I wasn’t sure what to expect…

Hand in Hand is a festival for LGBT choirs across the UK and Ireland held every 2 years and 2017 saw its third and biggest gathering yet at the Royal Northern College of Music in Manchester. 13 intrepid birdies (along with our conductor Rosie and chief camera-wielder Ali) made their way up North that weekend, armed with our smartest black clothes, 3 part harmonies and not quite enough blue & purple accessories (sorry Rosie!).

Songbirds’ first trip to Hand in Hand meant getting to perform alongside a whole host of other LGBT choirs from across the UK and Ireland.

I’ve been a member of songbirds for the past 2.5 years (apart from a 6 month hiatus while I was canoeing across the USA), and while I’ve racked up a number of performances during that time, this one felt different. There was a buzz in the air as we pulled into our Manchester MET accommodation (shout out to their great bike facilities and rainwater/greywater harvesting systems!); and with child-like excitement we collected our keys, surveyed our home for the next couple of nights, and spotted people with thought might be members of other choirs.

As we had the first slot of the opening concerts on Saturday, we were quite literally opening the show. This was both a blessing and a curse as we had no idea what to expect (but also no expectations).

As we walked out onto the stage bright theatre lighting meant I couldn’t make out how many faces were in the crowd looking back at me, but from the volume and variety of claps I knew it was a lot more than the 3 people some birdies had been picturing from the wings. With a small group of singers, we knew we all had to be on our A game; there weren’t 50 other members to hide behind and each voice would be forming a crucial part of the sound. It was nerve wrecking, but also incredibly bonding – we were a team, each person a vital cog, united in our cause. The 20 minute set flew past in a flurry of clicks, stomps and raised heartbeats. My adrenaline levels surged with each 3 part harmony and rumble of applause. At the end of ‘Bread and Roses’ I even picked out an audible gasp of ‘lovely!’ from the crowd.

The auditorium at Royal Northern College of Music provide our largest stage to date – beautifully lit and with fantastic acoustics.

As I floated out of the auditorium on a wave of endorphins and applause I looked around at my fellow birdies: their smiles were broad, their eyes twinkled, and my heart swelled with pride. The flock could barely contain itself as we twisted our way down the corridors to the dressing room before bursting into a loud jabbering of exclamations and congratulations. It was clear that my own emotions were ubiquitous. While the experience of singing together, especially in front of an audience is always bonding, the trip away really expanded this opportunity, giving us the time to hang out, laugh together, and throw some questionable dance-floor shapes… Add to that the fact that this performance was probably our biggest to date and in a real auditorium and it’s no wonder that those smiles and twinkling eyes were fixed for the whole weekend.

The Songbirds flock has always had a special place in my heart, and the experience in Manchester has only strengthened that sentiment for me. It was so great to feel the energy and excitement emanating from every member as we discussed future plans for songs, trips and general world domination – Hand in Hand was acting as a catalyst for new ideas and spurring us on to try bigger and better things. 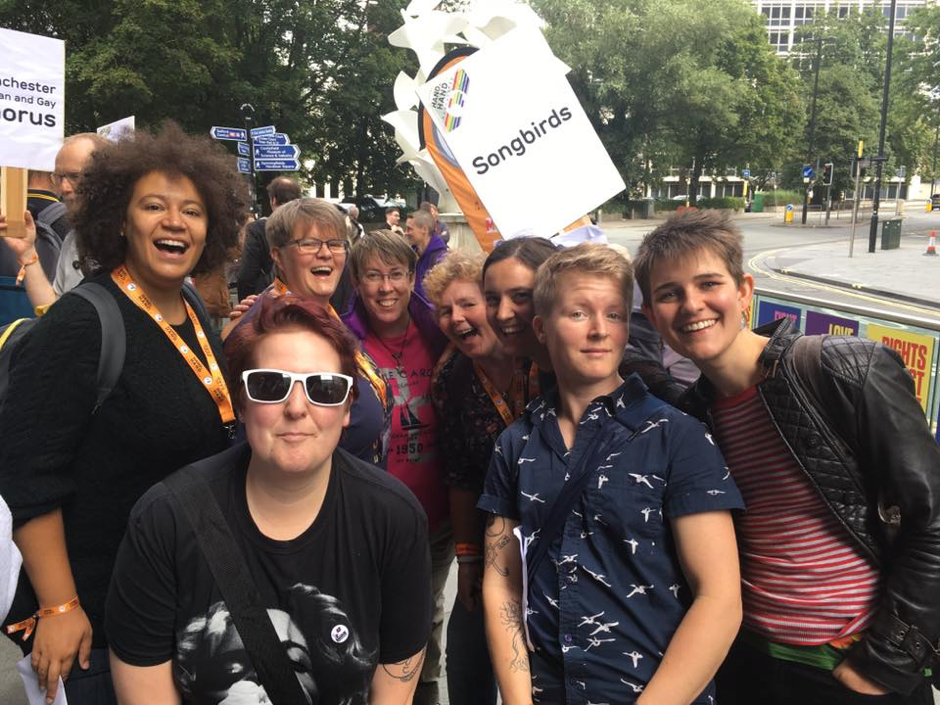 It was also a great reminder of why Songbirds (as Wales’ only choir for lesbian, bi and trans women as well as non-binary people) is so important. The final day included a speech by a spokesperson from Proud Voices, an umbrella organisation working to connect LGBT choirs throughout the UK and Ireland. They explained how they are often asked why, in 2017, we still need ‘gay choirs’, and his response really struck a chord with me:

‘Sometimes we need spaces where everyone is like us, where we are no longer a minority.’

For me this rings so true, and is something I’m still only just coming to appreciate. In fact it only occurred to me when I heard those words – I had gone the whole weekend without giving a thought to whether or not I might have to disclose my sexuality to any of the new people I met. It was comfortable and easy, and it was thought-provoking to realise that this was a rare feeling.

So it is with a renewed appreciation that I look forward to Monday nights, when Songbirds provides me with a scaled-down version of the Hand in Hand experience. As we gather in the pews of the church snatching catch up chats before the warm up I feel a huge sense of community. We are a diverse group of people yet we have a depth of shared experiences and common ground, and for those two hours a week it’s easy to forget that I am part of a minority group as I am caught up in the wonderful experience of singing as a choir.

2 thoughts on “Side by Side, Hand in Hand, we all sing together”

This site uses Akismet to reduce spam. Learn how your comment data is processed.